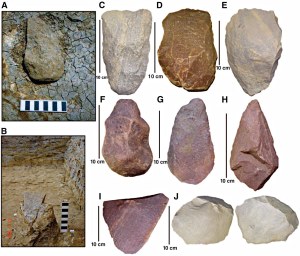 One of the most familiar icons of archaeology, the biface or Acheulean ‘hand axe’ was invented in Africa, presumably by H. ergaster, about 1.6 Ma ago and apart from in the Middle East, where it first occurs around 1.4 Ma, elsewhere it seemed to have been a late arrival in the artefact record. Human colonisation of Asia began as early as 1.8 Ma ago, so in its absence those early arrivals have been assumed not to have brought the Acheulean technology but used less elegant tools similar to the earliest Oldowan edged pebbles. Although parts of Asia were occupied by H. erectus until as recently as ~20 ka, they are believed not to have managed the biface breakthrough.  It has been widely accepted that abundant biface tools in India date from about 500 ka ago, presumed to have been brought by H. heidelbergensis migrants. An object lesson in the way that new techniques rather than new archaeological sites can dramatically change such long-held notions has emerged from excavations at Attirampakkam about 30 km NW of Chennai (Madras) in South India (Pappu, S. et al. 2011. Early Pleistocene presence of Acheulian hominins in South India. Science, v. 331, p. 1596-1599). This was the site where Palaeolithic tools were first unearthed  in the sub-continent by Robert Bruce Foote in 1863. The Indo-French research team used the cosmogenic isotope- and magnetostratigraphic dating methods to estimate when the tools were buried and discovered a much earlier age than expected, between 1.0 to 1.5 Ma. That throws into question the assumption of younger ages in general for the Acheulean technology in India, but more important, suggests that there was an eastward wave of migration from Africa shortly after the invention of biface tools. A wave of re-evaluation of the somewhat confusing Asian record of early humans seems on the cards.

One thought on “Early bi-face tools from South India”